How to mess with your roommate

Before I explain what I did to hurt poor Logan, I must explain our apartment’s media setup. You will see why shortly.

Logan, if you’re reading this, I hope you’re more entertained than not.

We have a computer running Ubuntu desktop connected to a TV. This acts as our media server. Because it is also generally useful for it to be internet-connected, it also serves a couple of webpages, an SSH server, and handful of other services.

Since the TV is 4K and the desktop computer is salvaged, the graphics card it had was not acceptable. Logan decided to purchase a several-generations-old NVIDIA graphics card (which was far better than our existing one) to display smooth 4K video.

Shortly after the installation, we had a couple of driver glitches, at which point I thought it would be humorous if there was a way to manually launch error messages.

After some internet searching, it became apparent that remotely displaying a message on the TV is as simple as:

(The DISPLAY=:0 bit is necessary because there is no display on the session I am connected to, and I want to show it on the primary viewing display.)

Since we were having trouble with the NVIDIA graphics card, however, I went with something more similar to:

I gave this a go (and it worked), but manually logging into the server from an SSH client every time I wanted to bother Logan was a pain. So I decided to get crafty.

I thought about making a cron job to bother him regularly, but that has two problems:

Other options like a SysVInit script were also out for similar reasons.

So I decided on instead making a publicly-accessible webpage that has a button on it: “Fuck with Logan”.

In order to execute, I figured I needed a couple things:

Which ends up being:

So I went and set up a website at http://our.apartment.server with a landing page (logan.html) and an “action page” (zenity.php):

For those who can’t render HTML in their heads (most people, I imagine), that page looks like this:

When the button is clicked, it POSTs to another page that does the heavy lifting:

This page does a number of things:

For those who can’t render HTML in their heads (again, hopefully most people), that page looks like this: 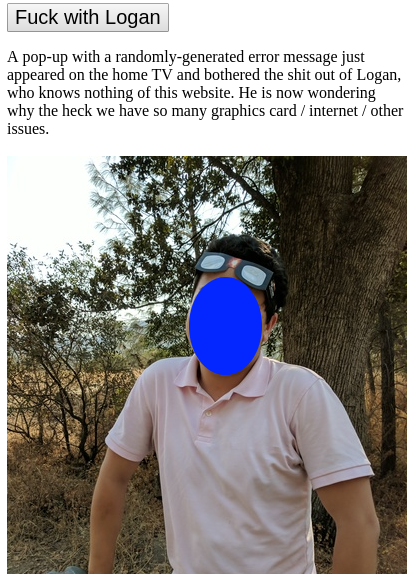 If you’re wondering why the webpage allows code execution in such a fashion, and how the web server owner (www-data) could possibly execute commands as the display user (thedisplayuser), you will probably be happy to know that I strictly limit it in the sudoers file:

This particular bit of configuration allows for www-data to execute only /usr/bin/zenity as thedisplayuser, and without a password.

I deployed it after squashing some annoying PHP and NGINX configuration nonsense. Then, I sent the URL to a couple of friends on campus who know Logan.

Thank goodness Logan reacted as strongly as he did. If he’d been mildly irritated, I would have been peeved that all my efforts were for nothing. But no! He lost his cool.

I cannot count how many reboots, driver re-installations, kernel modifications there were. I only wish I had filmed how angry he got when, after opening VLC, someone in the apartment popped up a bunch of windows with graphics card errors.

But I got too amused, and Chris, another roommate, decided to intervene…

I noticed one day when Logan was asleep that an error message that said “Max is behind all this” showed up. What??? I had been reverse-pranked! So I investigated, and found that somebody (Chris), had edited that message into zenity.php to be chosen at random. I promptly removed it (Logan couldn’t figure out the prank just yet), and assumed the fun was over. BUT NO.

A week or so later, the messaged popped up again. I assumed Chris had noticed and decided to re-add it to the list. Nope. Wasn’t there. After carefully checking the file, I noticed that it was now calling /usr/sbin/zenity instead of /usr/bin/zenity (the system default) and there was an accompanying entry in the sudoers file to allow it. What was /usr/sbin/zenity? A shell script:

Well, that’s some next-level shit if I’ve ever seen it. Ninety nine percent of the time, it does the right thing — and the other one percent it displays “Max is responsible for these.” I deleted the file (a mistake, I now know) and sudoers entry, and changed zenity.php to the way it was. The messages stopped appearing. BUT THEN THEY CAME BACK.

I checked zenity.php. Nothing new. /usr/sbin/zenity? Gone. Color me confused.

So I decided I’d peek into /usr/bin/zenity:

The crafty little fucker. He’d edited the zenity binary directly to BE A BASH SCRIPT and work 1/70th of the time. What the hell. And what even is rpmdb-client?? So I fought back. I modified it:

See the difference? The first one calls /usr/sbin/rpmdb-client instead of /usr/bin/rpmdb-client and made the sbin variant a no-op bash script. With all luck, he wouldn’t notice the one-character change and his message would never display.

TODO: Figure out the difference between the ELF executable in /usr/sbin/zenity and /usr/bin/rpmdb-client, which was created by Chris. There is some strange binary difference I don’t understand yet.

I decided to fight back further before Chris found out about the one-letter differential described above. I reverted all of my changes and decided to make a patch to zenity instead. Major props to Tom Hebb (like in every other technical post I write) for helping me with this. Here’s what I did:

This patch changes zenity so that if it notices the message contains the text “max” or “Max”, it quietly does nothing.

UPDATE: So far (end of March 2018), Chris has not noticed that I have modified the binary. Logan has also therefore not noticed any messages that include my name. There is as of yet no end in sight to the prank, unless I decide to tell him when we graduate.

UPDATE: We graduated and all parted ways. Though Logan and I will be living together again next year, we will likely not be in the house enough to carry on this prank. I decided to publish this post before attempting further shenanigans.